This article originally appeared on cmeast.org

Arriving in Kiev late on the 24th of May, I stayed at the Confreres House, Gift of Heaven. It is a multi-purpose house, with a beautiful chapel with an outside entrance, a seminary, the provincial offices and a ministry house with meeting rooms in the lower level. The sisters of Mary of the Miraculous Medal live next door in the former provincial house. Now with the Miraculous Medal Association, this is clearly another model for a collaborative ministry and apostolate in Eastern Europe.

On the 26th of May, we left Kiev to travel to Snyatyn, Ukraine. There, they have a Shrine to Blessed Marta Wiecka, D.C. We travelled there to celebrate the end of the pilgrimage of her remains that travelled all over the country. 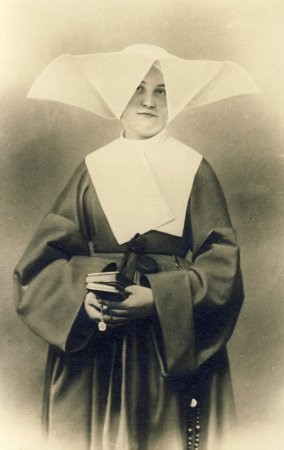 Blessed Marta (1874-1904) entered the Daughters of Charity of the Krakow, Poland Province. In 1899, she had a vision of Jesus on the Cross, telling her she would be with him soon. As a nurse she was sent to Snyatyn’s Hospital. One evening, she took the place of a nurse, scheduled to clean the room of a person who died of Tuberculosis. The nurse had a family and feared falling ill with the disease. She contracted the disease, and died from it in 1904. Her remains are sealed now in a small golden casket as the disease is known to be active until after 100 years. Many miracles have been attributed to her.

Hundreds of people attended this great event. The two day celebration included a Mass said by our Superior General, Fr. Tomaz Mavric, C.M. and prayers to her for illness and needs and for her beatification. There was a candlelight procession on the first night from the Shrine, through the city, to her tomb. The final day the Archbishop of Lviv, Ukraine celebrated the Mass. Many attested to the miracles and vocation that they received from her at that Mass.

The figure of the Blessed Mother at the Church of St. Anne, is that of Our Lady of the Zarvanytsia. This image is the major Marian patroness of all of Ukraine. She appeared to a monk in 1240 in the western part of the country. 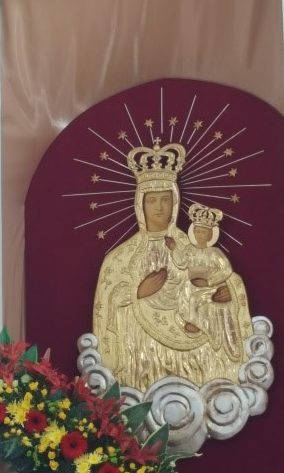 Meeting with the national council, they discussed the many projects that they were doing to spread devotion to our Lady. One of the major projects that they were preparing for was the Pilgrimage to our Lady of Zarvanytsia, which you can read more about here. They were excited to be able to have a booth to share the story of Mary with over 100,000 pilgrims. They used materials from their wonderful storehouse in the sisters’ house. There they have metals, stationary, pamphlets of explanation and leaflets of prayers, all in the Ukrainian language.

The visit included several other events at the confreres’ house. While I was there, I celebrated the Mass and was the homilist for the solemnity of the Ascension with the double communities of both the Vincentian Priests and Sisters of Mary of the Miraculous Medal. It was a great event and Fr. Myhalo (Michael) translated the homily as I spoke it in English. As usual, I always put a little humor into the talk. The “translator” was surprised and started laughing before he translated and that made everyone wonder what was coming. In my humor, I borrowed a trick from our confrere Fr. Sylvester Peterka, C.M. The Ascension celebrates the fact that Jesus enters more deeply into our lives. The gospels the week before celebrate that we become Jesus on earth.

In the Homily, I said, “So turn to your neighbor now and say “Hello, Jesus.” Everyone did it and laughed. However, they remember the homily to this very day. They just say “Hello Jesus!!”

Another event was the celebration of Sr. Vasylyna, S.M., making her first vows. How wonderful to see this young woman from Kiev, Ukraine, vow her whole life to God in service to the poor. During the homily I mentioned that the word “vow” comes from the Latin “voveo” which comes from “volo” to will or wish. It is important for her and all of us to realize that a vow, by its very nature is never completed. We are always willing it and wishing to fulfill it during our life. It can only be fulfilled in Heaven when we receive Salvation, the fulfillment of Jesus vow to fully be in us and love us! 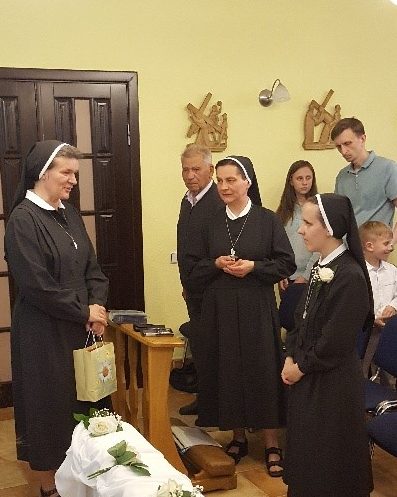 Sister being received by Provincial

Finally, I gave a Day of Recollection to my Vincentian confreres and our seminarians. The talk was on the “Redemptive Relationship” (my creation) between Mary and Jesus. When Mathew, Luke and John wrote about Mary and Jesus, they put down what they saw and heard. Little did they know that they were writing in words that we use today when we speak of salvation and redemption.

One of these redemptive words (as I call them) is in John’s Gospel. Jesus always refers to Mary as “woman” in John’s Gospel because he always refers to her as the New Eve, the new mother of all creation. Jesus was aware of Genesis 3:15, the first proclamation of salvation from the fall of Adam and Eve. There God says, “I will put enmity between you and the ‘woman’. 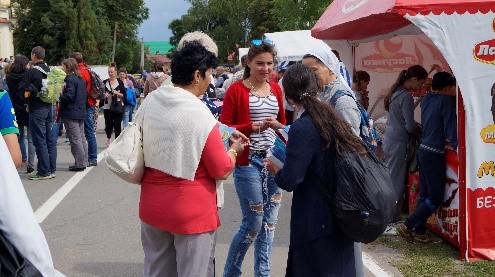 My visits to both Russia and Ukraine were providential. My fear of the hardships of long travel times and the strange Slavic language, were dissipated by Mary’s family in both countries, who were as warm and welcoming as home.

The Vincentian confreres, Daughters of Charity and the Association were busy about the Lord’s Kingdom – praying and helping each other and the poor. Most importantly, Mary and Jesus became a real presence with them and with me. It was a great gift to all to see the Vincentian Family Life in Russia, Siberia, and the Ukraine.